Crazy Kings is a card-based tower defense game where players must defend villages from incoming waves of evil minions. Joined by your trusty Avatar and armed with a Battle Deck consisting of Hero, Tower and Spell Cards, it's up to you to stop the evil armies from advancing further!

As your enemies become stronger from level to level, it's your duty to implement a strategic battle plan with your Battle Deck to ensure victory! Battle Decks can be enhanced by collecting Cards and combining any doubles to improve their stats.

There are several other ways of winning Cards. Defending The Outpost, completing Quests, fighting in The Arena and climbing King Towers are some ways you can earn rarer and stronger cards. You can also purchase a deck of random Cards from the Shop.

The Card Upgrader makes use of repeat cards by fusing them together to create more powerful upgraded Cards. When two identical Cards are obtained, the Upgrader will send an alert that two Cards are eligible. There is a waiting time for each Card upgrade dependent on the level and type of card being upgraded. This process can be sped up by using Gems.

Further two Card Upgraders were added in the game as of game update versions 1.16 and 1.36. So now, you can be upgrading three Cards at the same time.

There is one Arena per major faction where players can fight against waves of enemies to win Cards. In order to play in an Arena, you must have an Arena Ticket which regenerates over time or you can spend Gems to play whenever you want.

In the Arena the objective is to stop every single enemy, as you are only given one life. If you successfully stop all enemies from advancing, you will be rewarded a Card. If you play in the Arena enough times, you will win a bonus Card!

The bonus Card is at least Uncommon in rarity, it can also be a Rare Card as well!

There are currently five different Arenas: Minotaur Arena, Undead Arena, Avian Arena, Serpentine Arena, and Orc Arena. Each Arena gives out different Cards as rewards. You can view all possible rewards for an Arena by tapping "See Rewards" before entering an Arena battle.

After completing the first three levels, players will be eligible to participate in Quests. Quests require completion of certain objectives which are awarded with Map Pieces. Once 7 Map Pieces are gathered, they will lead you to a treasure chest containing Cards and/or Gems!

Quests exist in three difficulties: Easy, Medium, and Hard. An Easy level Quest will give you one Map Piece, a Medium level Quest two pieces, and a Hard one three pieces. Once a Quest has been completed, there is a 12 hour waiting period before it is replaced by another one.

The Outpost is a daily challenge that gives players the opportunity to win new and rarer Cards. Players must successfully defend the Outpost from the Ironclad Legion every day in order to be rewarded with more Cards to help build their Battle Deck.

After three days a random Uncommon card is awarded followed by a Rare Card on day seven. This pattern then repeats itself. However, the Outpost must be successfully defended each time or else progress is reset. In addition to a Card, 10 Gems are awarded after every battle. Every 35 days successfully defending the Outpost, your reward will be an Epic Card. This used to be the only way to earn Epic Cards without In-App Purchases but now you can also win them by completing Challenges.

Challenges is a battlefield where previously defeated levels (from maps or towers) will be presented with additional challenges/difficulties. After defeating (or passing) the level a new challenge will appear after 16 hours. Depending on difficulty, the defeat of a challenge will award medals (5-10). 50 medals will be converted to a Challenge Card Pack. This is currently only one of two ways to win a Legendary Card without purchasing a Card Pack through the store. The other is from Fortune Slots.

In the Tournament, you will use your current Battle Deck to fend off endless waves of enemies for as long as possible; the longer you last, the higher your rank!

The Grand Tournament is also available for players to compete with other players using the League System. The League System ranks players in six different categories -- Iron, Bronze, Silver, Gold, Platinum, and Diamond -- based on how long they can defend against enemies.

To progress from one league to the next, you will need to be in the top 5 positions of your league. Those occupying the last 5 positions are demoted to the next available lower league. 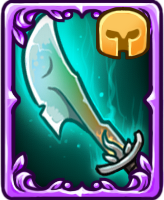 King Towers are unlocked after enough regular levels are completed. Each of the main factions have their own Tower where their King awaits your challenge. Each Tower has 50 levels to complete and each level awards players with Crowns rather than Stars.

Like Stars, Crowns affect the Avatar's experience level, however they are different in that they also unlock paths. Occasionally players must wait for bridges in towers to repair, but this process can be sped up with the use of Gems.

Aside from collecting Crowns, defeating the King Towers is necessary to collect one-of-a-kind Unique Cards that are personally used by each King. In order to collect these special cards, you must win the 50th levels of the King Towers with 3 Crowns.

In addition to their main Tower, the Serpent and Orc factions each have a smaller Tower. These are Ruins of the Serpent King (30 levels) and Ancient Treetrunk (10 levels), respectively. At present, the Slime, Yeti, and Ironclad factions do not have Towers of their own.

Invasion Events was a new feature added in game version 1.44. The first Invasion Event was called Minotaur Mayhem. The Event had a finite duration of 15 days and allowed the player to defend against the Minotaur Horde on 16 levels with three levels of Difficulty.

Gems can be used to quicken the waiting times for Card Upgrades, revive fallen Heroes (including your Avatar), buy Energy, play in the Arenas without tickets, consecutively play again in the Tournament and immediately repair bridges in the King Towers. Gems can be earned in the following ways: as prizes after successfully winning battles, as purchases made from the Game Shop, by collecting them from the Gem Mines, win in the Arena/Tournament or by completing Quests.

The Mines are opportunities to earn several Gems at once. Over time, the stockpile of Gems grows and you will be able to collect up to 15 Gems per Mine per day.

Community content is available under CC-BY-SA unless otherwise noted.
Advertisement